The Crown of Martyrdom

On August 14, we remember St. Maximilian Kolbe, priest and Martyr of Charity. St. Maximilian is the patron saint of families, prisoners, journalists, political prisoners, drug addicts and the pro-life movement. Born in a small village in Poland (now part of Ukraine) in 1894, he was given the baptismal name of Raym St. Maximilian Kolbe ond.  When he was a little boy, he was always in trouble!  His mother, exasperated, would say, “Raymond, what is to become of you??!” 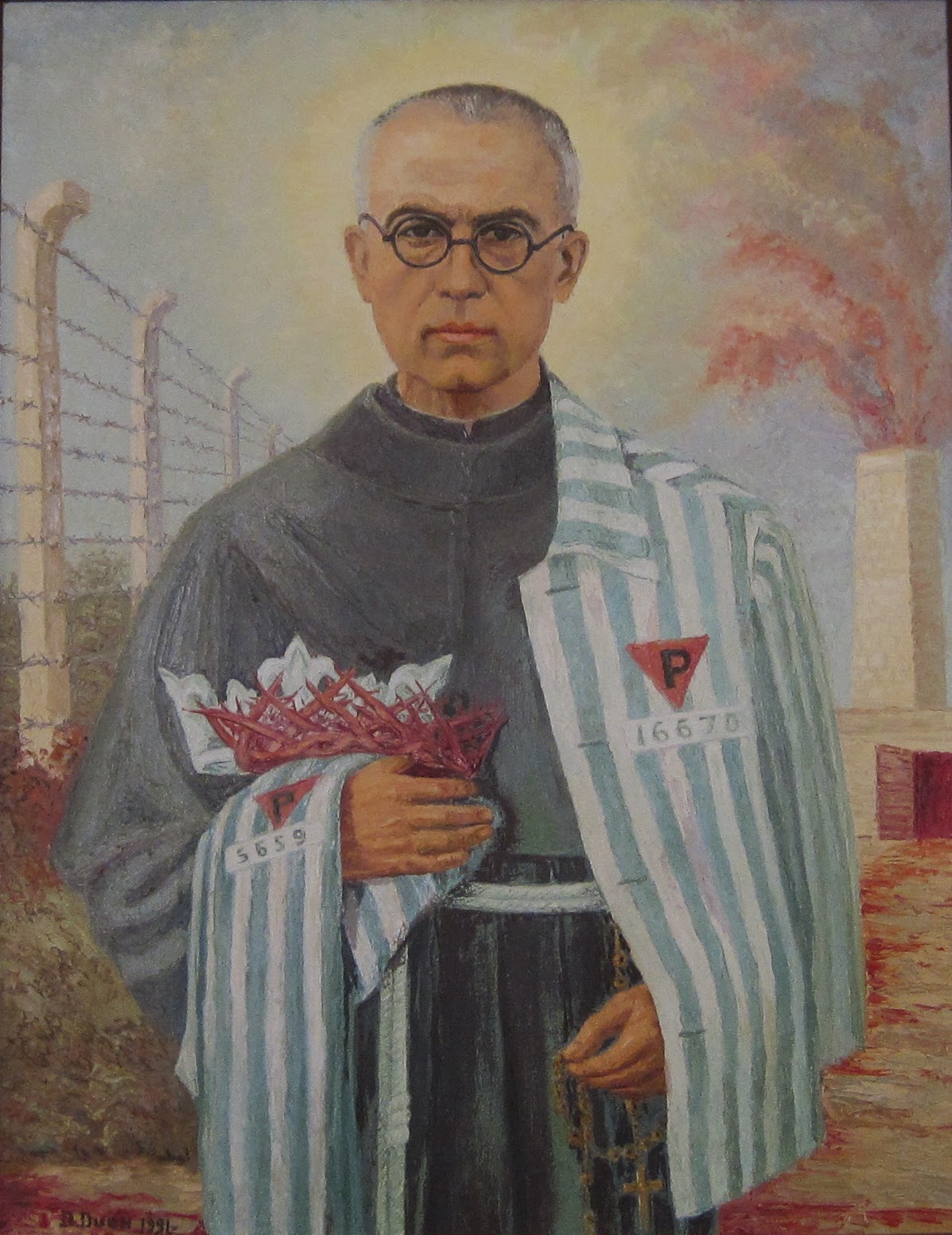 Surely his mother spoke about him to the Blessed Virgin Mary because his behavior changed when Our Lady appeared to him in the church of St. Matthew. She held two crowns, one white, symbolizing purity, and the other red, symbolizing martyrdom. When she asked him if he was willing to accept either crown, he told her he would accept both. Raymond shared this vision with his mother, but not with anyone else.

In 1910, Raymond entered the Franciscan Friars and was given the name Maximilian. Ordained in 1918, Fr. Kolbe earned degrees in theology and philosophy in 1919.  He began publishing the Knight of the Immaculata, a monthly magazine with the goal of building the kingdom of the Sacred Heart of Jesus through the mediation of the Immaculate Heart of Mary. In twenty years, the magazine had a million subscribers around the world.

When he was in his thirties, he founded a religious house not far from Warsaw. Within ten years, it had grown to over 1,000. Fr. Kolbe took several of his brothers with him to Nagasaki, Japan, to establish another house there, named the “Garden of the Immaculate.” It miraculously survived the atomic bomb dropped on the city in 1945. And four Jesuit priests who were assigned in Hiroshima to the Church of Our Lady of the Assumption, only blocks from the center of the explosion, were unharmed when almost everyone around them was killed.

Back in Poland, Fr. Kolbe was an outspoken critic of the Nazis. He was arrested and taken to Auschwitz in 1941. In the months before his execution, Fr. Kolbe ministered to all the other prisoners, continually seeking to give them encouragement and peace.

When a prisoner escaped from the camp, the Nazi commander, as a warning to the others, selected ten men to die in the starvation bunker. One of them asked for mercy, saying he had a wife and children. Fr. Kolbe stepped forward, volunteering to take the man’s place. After two weeks with no food or water, only four of the men remained alive. Because they were taking too long to die, each of the four was given an injection of carbolic acid. Fr. Kolbe was the last one to be killed. On August 14, 1941, the eve of the Assumption, Fr. Kolbe died.

But wait, there’s more to this story. When the explosion at Nagasaki occurred on August 9, 1945, Dr. Takashi Nagai was working in the x-ray department that he had founded at Nagasaki Medical University, only half a mile from the explosion’s epicenter. Eighty percent of the people at the university were killed that day. Dr. Nagai’s office was furthest away from the blast, but he was blown across the room, suffering multiple lacerations and blood loss from flying glass. He was also exposed to an extremely high dosage of radiation and was told by doctors that he had a short time to live.

Dr. Nagai had known Fr. Kolbe when he was in Japan in the 1930s and had x-rayed him to see the extent of his chronic tuberculosis. Because of the news blackout in Japan during the war, Dr. Nagai had no way of knowing what had happened to Fr. Kolbe. But a voice told him that he should pray for Fr. Kolbe’s intercession, so he obeyed, and he experienced a miraculous healing.

“The Immaculate alone has from God the promise of victory over Satan. She seeks souls that will consecrate themselves entirely to her, that will become in her hands forceful instruments for the defeat of Satan and the spread of God’s Kingdom.”  -St. Maximilian Kolbe.

Thursday, August 15th is the Solemnity of the Assumption of the Blessed Virgin Mary.  If you want to pray the 54 Day Rosary Novena, start on August 15 and finish on October 7, Feast of Our Lady of the Rosary.

To join the 54 Day Rosary Novena, pray consecutively 6 nine-day rosary novenas (27 days of petition and 27 days of thanksgiving), alternating mysteries.  As you pray for your intentions, please also pray for the salvation of our country.

The first 27 days, pray the Rosary with this added petition prayer.  Whether your petition has been answered or not, switch to the thanksgiving prayer on the 28th day.

Petition Prayer (27 Days): Blessed Mother, hear my plea and bring it before the throne of your Son, my Lord, Jesus Christ.  Please look with favor on this devotion, grant salvation to our country, and grant me [say your intentions here.] I ask these things of you, my Mother, in the name of the Father, and of the Son, and of the Holy Spirit. Amen.

Thanksgiving Prayer (27 Days): Blessed Mother, thank you for hearing my prayer and interceding on my behalf.  Mary, Mother of my Soul, be with me all my days, and accept my humble thanks for your many gifts, which I accept in the name of the Father, and of the Son, and of the Holy Spirit.  Amen.